June 11, 2017
Recently I came across this Amazon company named Audible. Audible sells digital audio books, TV Programs and magazines. To give it a try, as it was free for the first month or so, I downloaded it on my iPhone and was going through the various titles. And then, somehow, I decided to download the audio book: Outliers by Malcolm Gladwell.

Listening to a book is altogether a different experience. And to listen a book on Success and its various factors, requires thorough attention. It's not as easy as listening to songs on your phone. 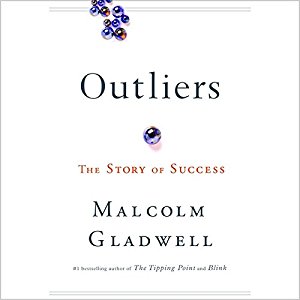 Anyway, I started listening to the Audio of Outliers. The book was narrated by Gladwell himself. And I must say that I loved his book.

Gladwell is an amazing storyteller and he captivates you with his resourceful topics ranging from hockey players to plane crashes. If you thought that success is all about hardwork; then you're wrong. Success has various factors along with hardwork. It has to do a lot with your upbringing, the place where you're from, you birth-date, the opportunities that come along the way and much more.

"Success is not a random act. It arises out of a predictable and powerful set of circumstances and opportunities."

Gladwell takes us to an amazing journey of what makes the outliers; outliers. As he says, the purpose of the book Outliers:

"It's not enough to ask what successful people are like. [...] It is only by asking where they are from that we can unravel the logic behind who succeeds and who doesn't."

The book starts with the process of selection of Canadian Hockey players and why the players who're born in the first quarter of the year are more successful than those that are born later quarters of the same year. Age is a differentiating factor for selection in Canadian Hockey. A boy who is born on 1st January, 1998 and a boy who is born on 1st December, 1998; both get selected to the same team as per the selection process. But the one born in January is more stronger and powerful and has an added advantage of almost a year of practice than the one who is born in the last quarter of the same year.

At the core of the book, Gladwell emphasizes the rule of 10,000 hours. That's the number of hours of practice you need to be an expert in the field of your choice. He supports this rule with various examples from Beatles to Bill Gates.

He also explains how demography and culture plays an important role in getting success; and failure as well.

In short; Outliers is a compelling read on why few people succeed and why few fail - thought from altogether new perspectives and filled with varied examples.

A few quotes I liked from Outliers:

“We prematurely write off people as failures. We are too much in awe of those who succeed and far too dismissive of those who fail.”

“It's not how much money we make that ultimately makes us happy between nine and five. It's whether or not our work fulfills us. Being a teacher is meaningful."

“Achievement is talent plus preparation”

“No one who can rise before dawn three hundred sixty days a year fails to make his family rich.”

September 08, 2016
I was reading Robin Sharma's - "Who Will Cry When You Die?" . Love reading the book because I can start reading from any page. And each small lesson of these little book provides food for thought. I read this book whenever I'm short of time, but want to read. It is great. A small excerpt from the very first lesson of the book: We can fire a missile across the world with pinpoint accuracy, but we have trouble keeping a date with our children to go to the library. We have e-mail, fax machines and digital phones so that we can stay connected and yet we live in a time where human beings have never been less connected. We have lost touch with our humanity. We have lost touch with our purpose. We have lost sight of the things that matter the most. Isn't it worth pondering? We're busy checking our phones and emails every 5 minutes but we forget to check our purpose, our goals and our family members. We continuously try to refresh our news feed on Facebook
9 comments
Read more

November 14, 2018
Updates - 7 can be found here Winter has approached. And as usual, I'm motivated to remain fit. Hope this time the motivation remains throughout the year. Have started running. However, it's a different story that I'm running less and walking more. But the important thing is, the needle is moving. Apart from running, have also started doing a few stretching and upper-body exercises . My initial goal is to complete 5 km run. Became member of Central Library, Gandhinagar and read 2-3 books namely, 1. The Palace of Illusions 2. Curfewed Night and currently reading Akoopar (Gujarati). In between I also read Chetan Bhagat's The Girl in Room 105 Rudraraj and Rivanshi are not here in Gandhinagar. So I can engage myself in Running and Reading. Lets see what happens once they are here.  Eagerly waiting for this years' Ahmedabad National Book Fair. This time it's in November (winter season) rather than May (Summer season). Reason: To reduce carbon footprint a
Post a Comment
Read more

10 Things To Do When Your Vehicle Breaks Down

August 31, 2016
I'd been for a doctor's consultation in Ahmedabad today. While I was going to Ahmedabad, it wasn't raining. While returning back to Gandhinagar, it started raining. It was pitch dark and the visibility was less due to the heavy downpour. And then a bad idea came to my mind. What if my vehicle breaks down at this moment ? So I got my topic for 10 ideas . Here are 10 things to do when your vehicle breaks down: Enjoy the rain and forget about going home. Park your vehicle at some safe place and ask for a lift/free ride. Call a taxi. Call a friend. Walk up to your home. Stay at the same place the whole night and observe the nature and the surroundings. A bad idea but it would definitely be an adventure. ;-) Try to repair the vehicle.  Call a mechanic. Stop a truck and carry it to your place. Leave your vehicle and buy a new one. Very bad idea ;-)
Post a Comment
Read more