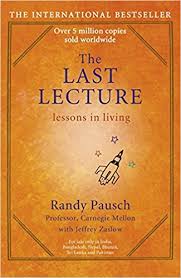 Assume that you're on the verge of dying. You've probably a few months to live. You're suffering from some notorious form of cancer wherein you've very less hope of surviving.

How would you want your children to remember you? Of what you thought about them? Your feelings for them?

A few days ago I read the book - The last lecture by Randy Pausch. Randy was a professor at Carnegie Melon University and the book and the lecture is about achieving your childhood dreams. But more than that, I found the book as a good resource on parenting.

Here are a few points that I found worth sharing:

2. Engineering isn’t about perfect solutions; it’s about doing the best you can with limited resources.

3. What wisdom would we impart to the world if we knew it was our last chance?

4. I thought there were two types of families :
1) Those who need a dictionary to get through dinner.
2) Those who don’t?
We were No. 1.
//A thought that needs to be imbibed and practiced by many families today. We're so engrossed in the world of mobile phones and TV and the same is now incorporated into the lives of young kids. Reading must be give prime importance and should be woven into our lives with very less time for mobile phones and TV which are making us dumb.

5. The instinct in our house was never to sit around like slobs and wonder. We knew a better way : Open the encyclopedia. Open the dictionary. Open your mind.

6. Stories should be told for a reason.

7. I also think my dad would be reminding me that kids — more than anything else — need to know their parents love them . Their parents don’t have to be alive for that to happen.

8. You’ve got to get the fundamentals down, because otherwise the fancy stuff is not going to work.

9. “When you’re screwing up and nobody says anything to you anymore , that means they’ve given up on you .

10. There’s a lot of talk these days about giving children self - esteem. It’s not something you can give; it’s something they have to build.

11. When we send our kids to play organized sports — football, soccer, swimming, whatever — for most of us, it’s not because we’re desperate for them to learn the intricacies of the sport. What we really want them to learn is far more important : teamwork, perseverance, sportsmanship, the value of hard work, an ability to deal with adversity. This kind of indirect learning is what some of us like to call a “head fake.”

12. My parents were frugal. Unlike many Americans, they would never buy anything for the purposes of impressing other people, or as any kind of luxury for themselves. But they happily bought the World Book, spending a princely sum at the time, because by doing so, they were giving the gift of knowledge to me and my sister. They also ordered the annual companion volumes.

15. Brick walls are there for a reason. They give us a chance to show how badly we want something.

16. My parents had raised me to recognize that automobiles are there to get you from point A to point B. They are utilitarian devices, not expressions of social status...... my belief that you don’t repair things if they still do what they’re supposed to do. The cars still work. Let’s just drive ’em .”

17. Through the whole ordeal, I don’t think we ever said to each other : “This isn’t fair.” We just kept going. We recognized that there were things we could do that might help the outcome in positive ways…and we did them. Without saying it in words, our attitude was, “ Let’s saddle up and ride.”

18. His delivery was more fun than whatever he had for us.
//Randy's father used to bring chocolates or some toys after returning home from office. And the way in which he used to deliver those little things to the children (as if demonstrating an act of magic) was much more enjoyable than the things he brought. This is a beautiful way of happiness in small things.

20. Ask yourself : Are you spending your time on the right things?

21. Take a time out. It’s not a real vacation if you’re reading email or calling in for messages.

22. Time is all you have. And you may find one day that you have less than you think.

23. The only way any of us can improve — as Coach Graham taught me — is if we develop a real ability to assess ourselves. If we can’t accurately do that, how can we tell if we’re getting better or worse.

24. ....“I know you’re smart. But everyone here is smart. Smart isn’t enough. The kind of people I want on my research team are those who will help everyone else feel happy to be here.”

25. I learned that my dad had taken a photo of our TV set the second Neil Armstrong set foot on the moon. He had preserved the moment for me, knowing it could help trigger big dreams. We still have that photo in a scrapbook.

26. Give yourself permission to dream. Fuel your kids’ dreams, too. Once in a while, that might even mean letting them stay up past their bedtimes.

27. Fashion, by the way, is commerce masquerading as hip. ..... You buy new clothes when your old clothes wear out.

28. Somehow, with the passage of time, and the deadlines that life imposes, surrendering became the right thing to do.

29. Randy to his daughter:
(1) “It took a long time, but I’ve finally figured it out. When it comes to men who are romantically interested in you, it’s really simple. Just ignore everything they say and only pay attention to what they do.”
(2) ... I want her to grow up knowing that I was the first man ever to fall in love with her.

30. .... (there should be) healthy balance between optimism and realism.

31. One rule in our house is that you may not ask one - word questions. Dylan embraces that idea. He loves to formulate full - sentence questions, and his inquisitiveness goes beyond his years.

32. So my dreams for my kids are very exact : I want them to find their own path to fulfillment.

September 08, 2016
I was reading Robin Sharma's - "Who Will Cry When You Die?" . Love reading the book because I can start reading from any page. And each small lesson of these little book provides food for thought. I read this book whenever I'm short of time, but want to read. It is great. A small excerpt from the very first lesson of the book: We can fire a missile across the world with pinpoint accuracy, but we have trouble keeping a date with our children to go to the library. We have e-mail, fax machines and digital phones so that we can stay connected and yet we live in a time where human beings have never been less connected. We have lost touch with our humanity. We have lost touch with our purpose. We have lost sight of the things that matter the most. Isn't it worth pondering? We're busy checking our phones and emails every 5 minutes but we forget to check our purpose, our goals and our family members. We continuously try to refresh our news feed on Facebook
9 comments
Read more

November 14, 2018
Updates - 7 can be found here Winter has approached. And as usual, I'm motivated to remain fit. Hope this time the motivation remains throughout the year. Have started running. However, it's a different story that I'm running less and walking more. But the important thing is, the needle is moving. Apart from running, have also started doing a few stretching and upper-body exercises . My initial goal is to complete 5 km run. Became member of Central Library, Gandhinagar and read 2-3 books namely, 1. The Palace of Illusions 2. Curfewed Night and currently reading Akoopar (Gujarati). In between I also read Chetan Bhagat's The Girl in Room 105 Rudraraj and Rivanshi are not here in Gandhinagar. So I can engage myself in Running and Reading. Lets see what happens once they are here.  Eagerly waiting for this years' Ahmedabad National Book Fair. This time it's in November (winter season) rather than May (Summer season). Reason: To reduce carbon footprint a
Post a Comment
Read more

10 Things To Do When Your Vehicle Breaks Down

August 31, 2016
I'd been for a doctor's consultation in Ahmedabad today. While I was going to Ahmedabad, it wasn't raining. While returning back to Gandhinagar, it started raining. It was pitch dark and the visibility was less due to the heavy downpour. And then a bad idea came to my mind. What if my vehicle breaks down at this moment ? So I got my topic for 10 ideas . Here are 10 things to do when your vehicle breaks down: Enjoy the rain and forget about going home. Park your vehicle at some safe place and ask for a lift/free ride. Call a taxi. Call a friend. Walk up to your home. Stay at the same place the whole night and observe the nature and the surroundings. A bad idea but it would definitely be an adventure. ;-) Try to repair the vehicle.  Call a mechanic. Stop a truck and carry it to your place. Leave your vehicle and buy a new one. Very bad idea ;-)
Post a Comment
Read more